Hey folks! I ran into an interesting situation with a customer the other day. They are using Tanzu Mission Control (TMC) with their kubernetes clusters and are trying to migrate from EKS to Tanzu Kubernetes (TKG) Clusters. I’m going to totally ignore the relative merits of EKS vs TKG and go straight to the how of the migration.

The rest of this article is going to talk about how to use kubectl, the velero cli, and TMC to migrate workloads from one cluster to another using Velero’s backup and restore functionality. I hope this is interesting and if you have anything else you’d like to hear about please ping me on twitter or Linkedin.

First thing’s first, lets deploy a wordpress instance using the well built and well currated helm charts from the good folks over at Bitnami. You can dig into them in more detail here.

In the code block below you’ll see the steps to add the bitnami helm repo and install wordpress in it’s own namespace.

Take a second here and browse to your wordpress page. It should look something like this: 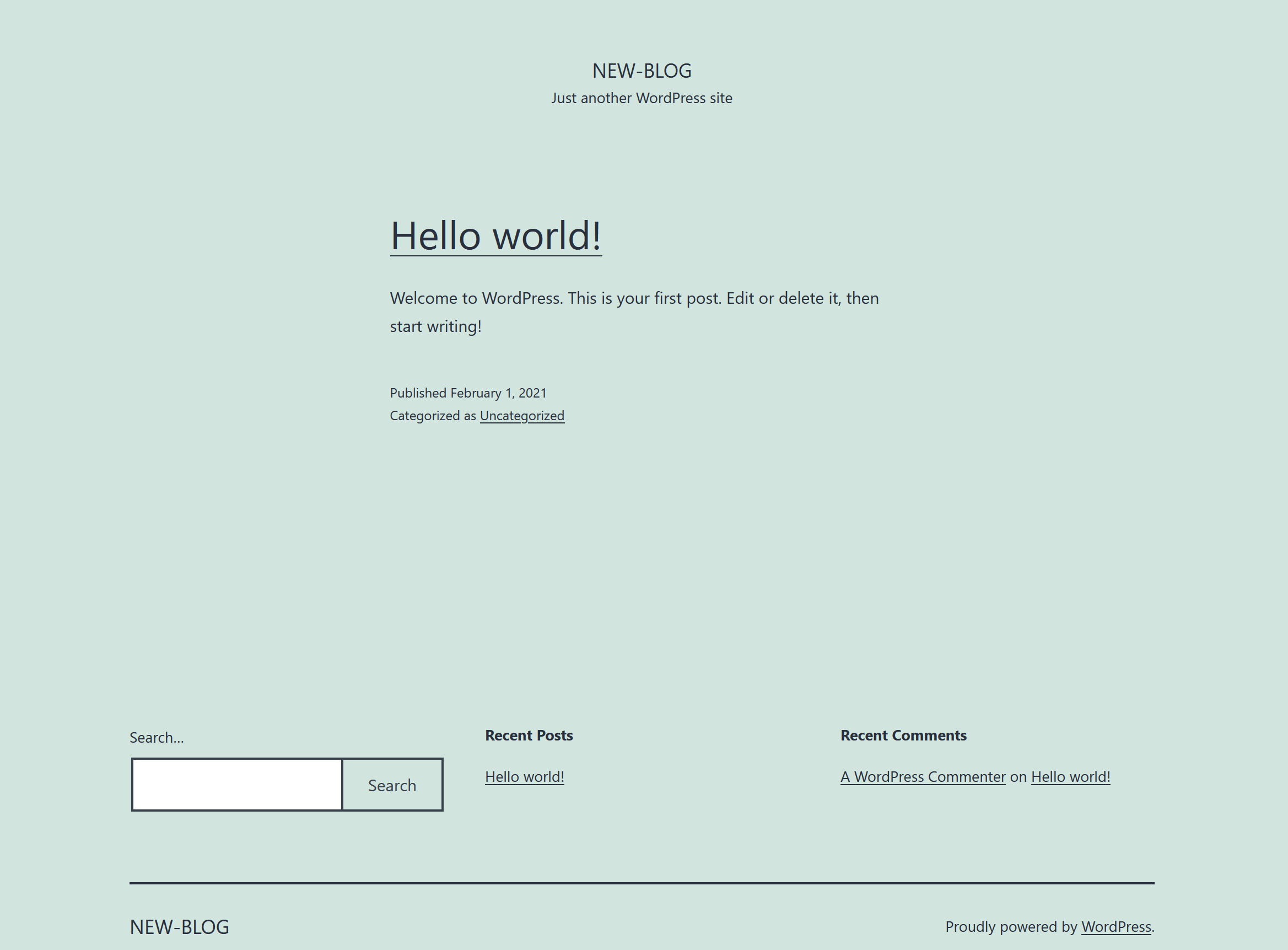 If you’re having trouble getting access to the page here’s the port-forward command I used: kubectl port-forward svc/new-blog-wordpress 8080:80 -n wordpress. The site will now be available at localhost:8080.

Quick disclosure here: Everything I’m telling you to do in the TMC console can be done instead via kubectl and the Velero cli. I’m not covering any of that in this article.

Once again I’m going to save everyone a little time and point you at the vmware docs for enabling data protection on your clusters. It’s a fairly painless process and VMware gives you an easy to use cloud formation template to get the environment set up.

You want to ensure you have data protection enabled on both clusters. 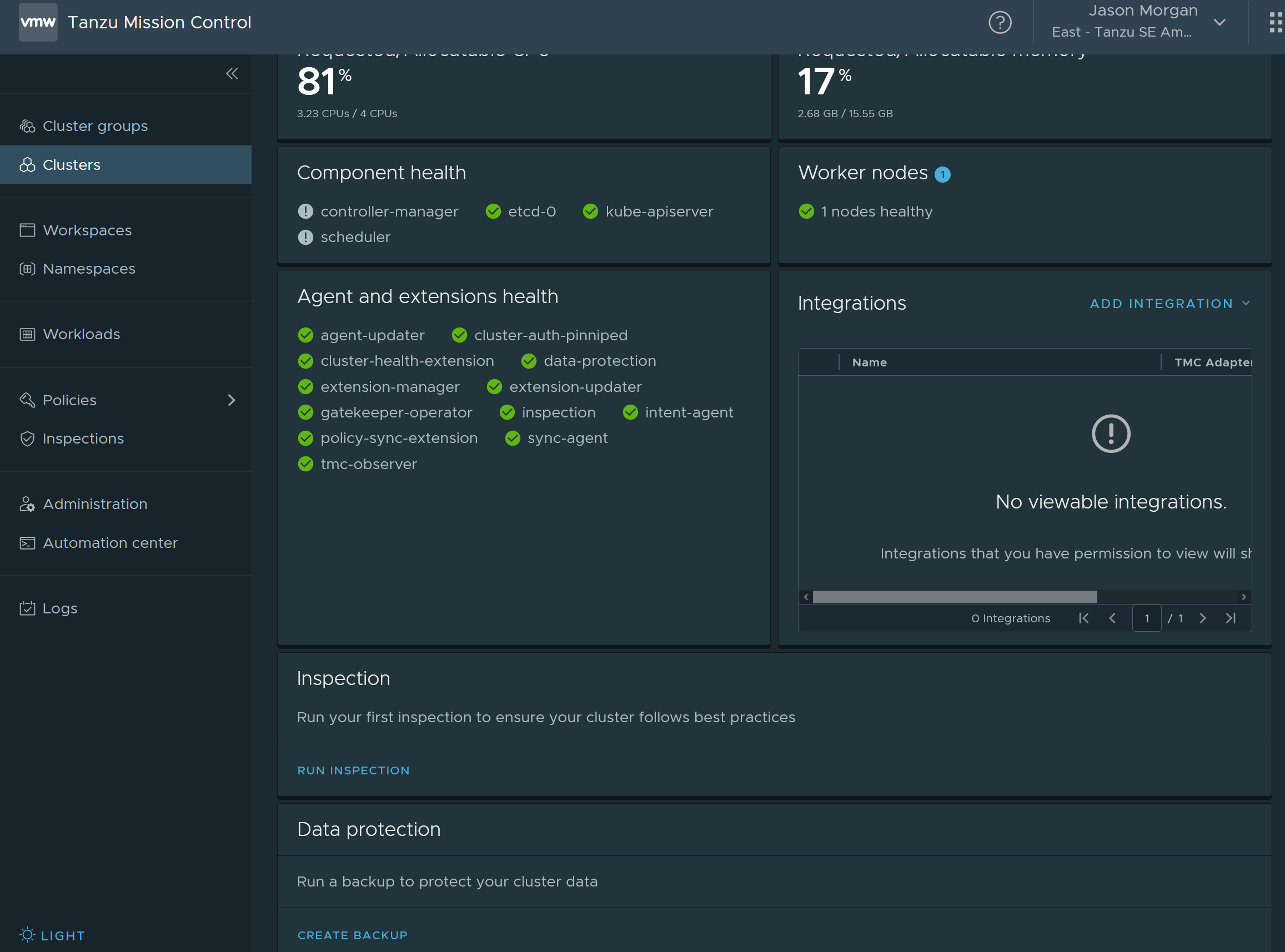 In the TMC console you need to select your cluster, in my case workload1 and head over the the data protection tab. From there you can schedule a backup and you have a few options. Feel free to do full or by namespace, I selected my wordpress namespace from before so I could simplify my restore. 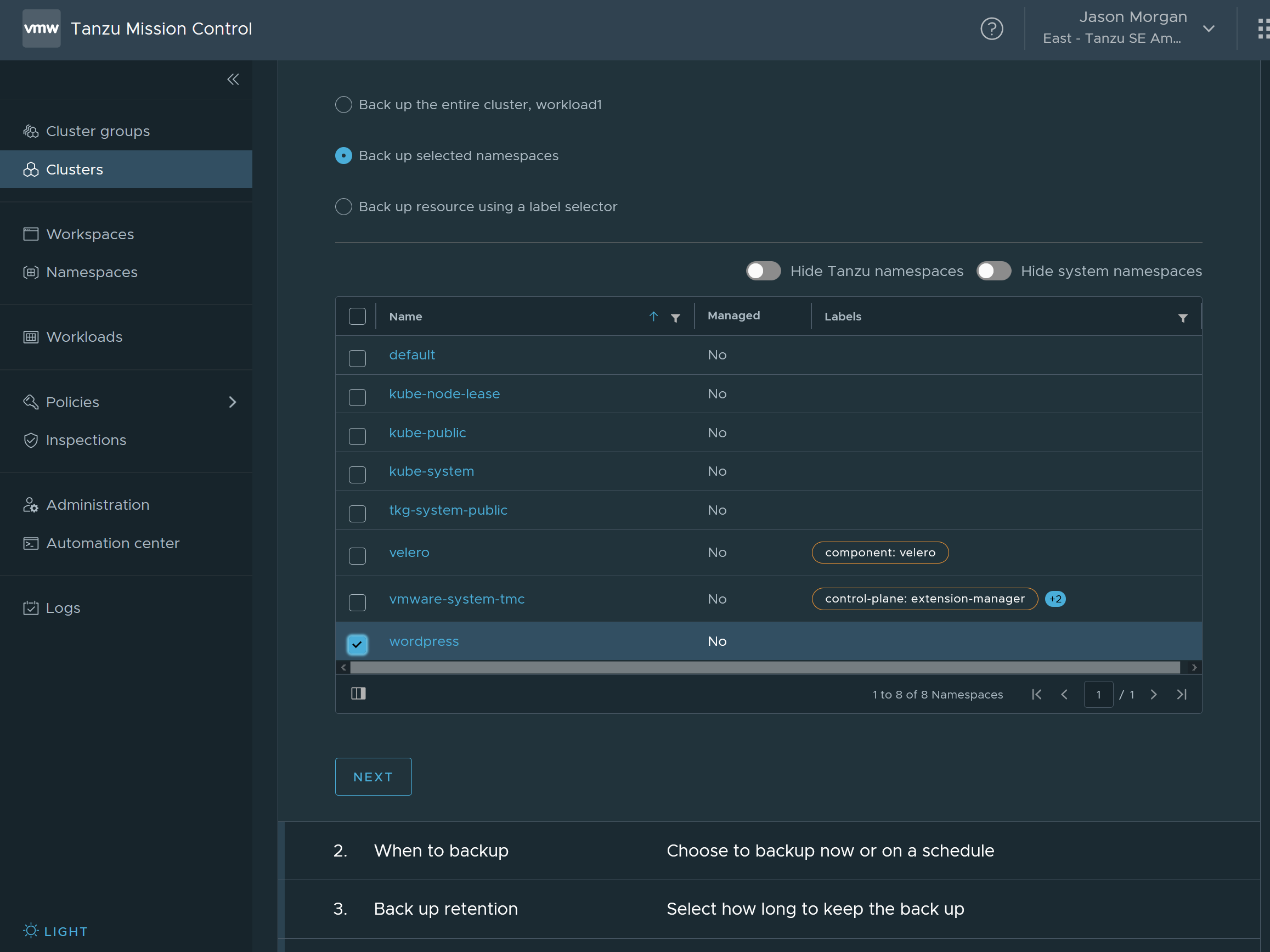 Once you have that done validate that your backup. 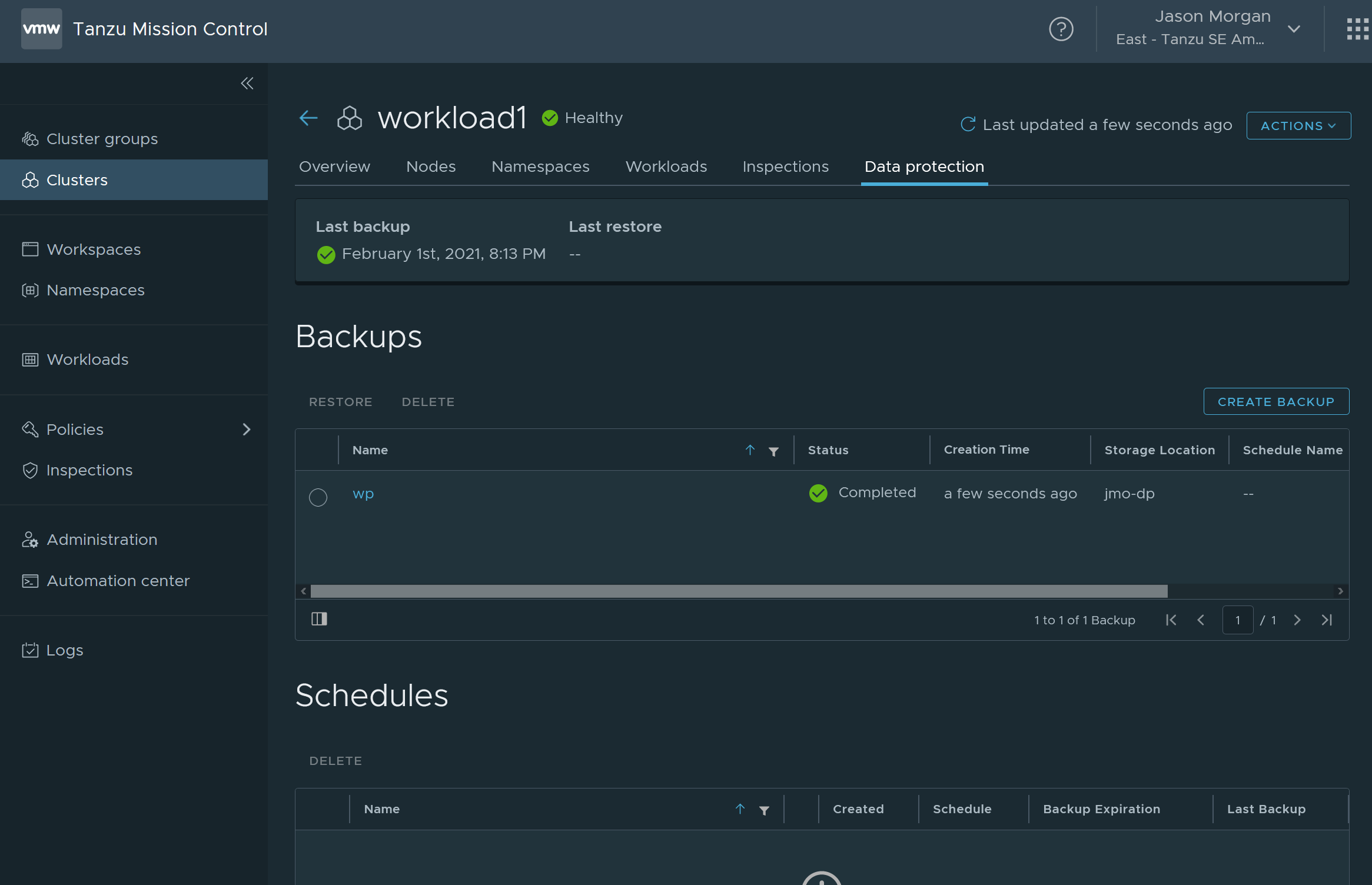 With that we have our starting point for migrating our wordpress blog from one cluster to another! The next section will have us heading back to the cli.

I start out doing a quick check that velero is installed on my cluster and validate my versions at the same time.

Seeing that tells me velero is good to go. Make sure you checkout each cluster before moving on.

Going to take a quick detour and talk about kubernetes custom resource definitions (CRDs) and how they relate to tools that integrate with the kubernetes api. CRDs are a handy way to extend kubernetes and allow apps like velero to build their own constructs right into the cluster. You’re going to see examples using both kubectl and the velero cli to perform various tasks.

With that in mind we’re going to explore the kubernetes API to find our backup and figure out how we can get our target cluster, workload2, to see the backup of the source cluster, workload1. When you look at the clusters, in either the TMC console or the cli, you’ll only see backups on the source cluster. We’ll dive into that in the next section.

Velero is going to create a bunch of new object types but we’re really only interested in 2 at this point. Backups, and Backup Storage Locations. You can see a bit more by running the following command: k get crd | grep velero.io

Neither construct is particularly complicated. Backups are just that, and they’re stored, and retrieved from, backup locations. We can see when we ask our clusters about backups workload1, the source cluster, sees a backup called wp. The backup wp represents the wordpress blog we want to move from workload1 to workload2. Unfortunately for us only our source cluster can see it for now. You can explore the clusters witht eh following commands.

You can see from the output that the backup is only visable from workload1. We’re going to checkout the backup locations and see what we can do about it.

Looking at the screen grab you can see my storage location for wp is listed as jmo-dp. In fact when we look at both workload1 and workload2 they each have a backup location called jmo-dp but when you dig deeper you see that the values for each don’t line up.

If you run the velero cli version of that command you’ll see something like the image below and you’ll note that while the s3 bucket name is the same the prefix the backup gets stored at are different. 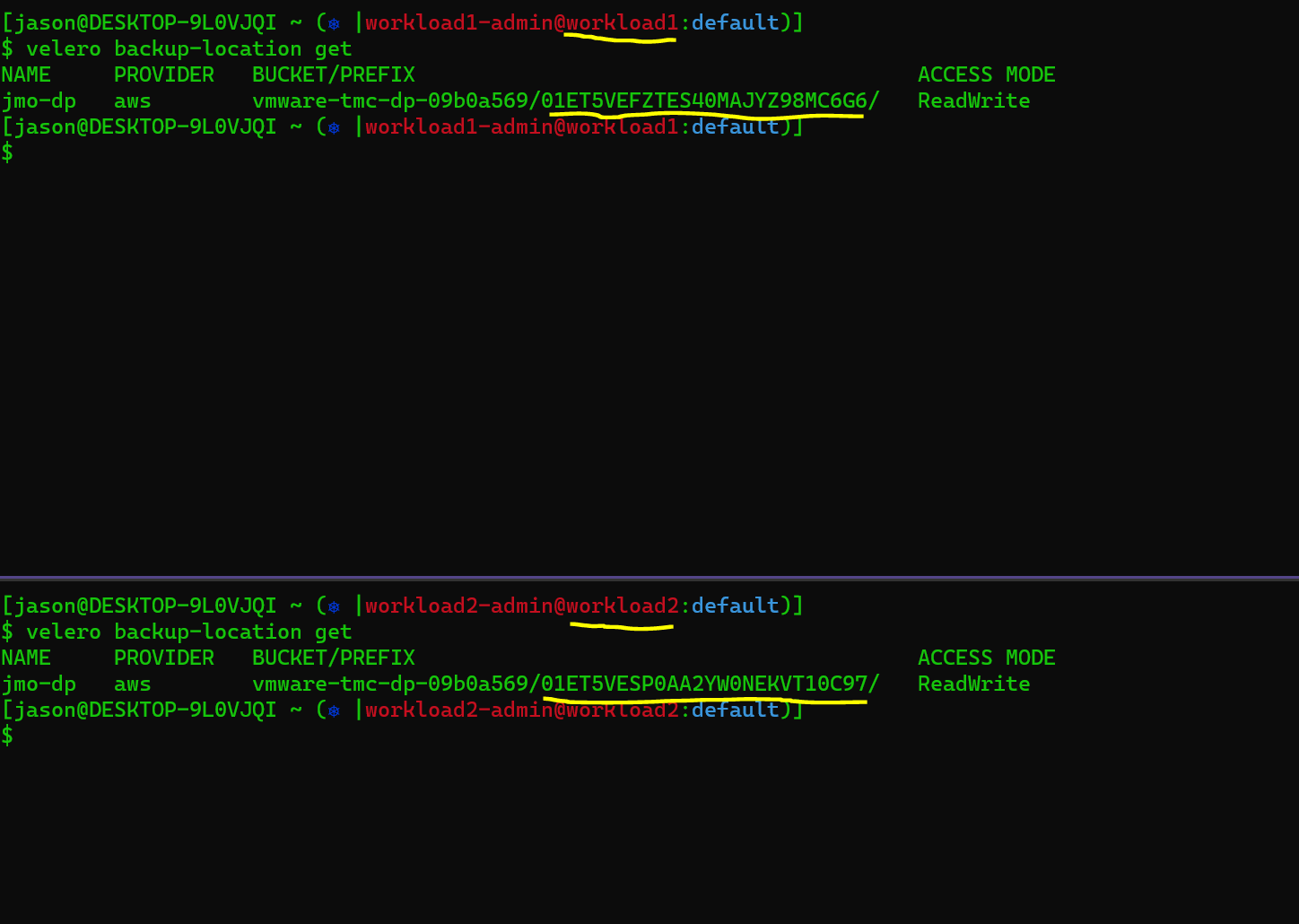 Going to go ahead and spoil any remaining mystery we have at this point. In order to get our cross cluster restore working we need to copy over our backup location from workload1 to workload2. When you dig into the backup storage location on workload1 you’ll see an object that looks a lot like this:

In order to successfully do a cross cluster restore we need to create a new backup location on workload2 and add new credentials to the velero cloud config secret.

Checkout the Velero docs here. This is a good place to start but in order to get this working I also needed to look at the aws backup plugin. After diving in there you see that the value under spec.config.profile refers to the aws credentials that velero will use to access the backups.

Let’s create a new backup location object on workload2. I’m going to show an example using my cluster config but you need to get the appropriate values from your own source and target clusters.

In order to use workload1’s backup we need to update workload2’s cloud-credentials, the secret velero uses to backup and restore clusters. You can view your cloud-credentials secret like this kubectl get secret cloud-credentials -n velero -o json | jq -r .data.cloud | base64 -d && echo and you’ll see some output like:

We’re going to add the values from workload1, our source cluster, under a new heading, source-creds. So here we’re going to do a little credential surgery and create a new entry in this file, base64 encode it, and then replace the cloud-credentials secret. It’s not exactly an easy or seemless process but I expect VMware is going to work on making cross cluster restores easier in a future version of TMC.

In order to update the secret I did the following:

Then we’re going to re-encode it and update our secret on workload2.

EDITORS NOTE Watch that your AWS token didn’t expire. In the time it took me to write and test this process I had to get a new token and re edit the cloud-credentials secret.

With that done let’s run some commands on workload2 to see if our new backup location is configured correctly and available.

Now that we’re happy with the velero config we’re heading back to the TMC console to handle the restore. Again please feel free to do the rest via the velero cli if you prefer.

Browse over to your cluster and go back to the data protection tab. You should be able to see the wp backup. 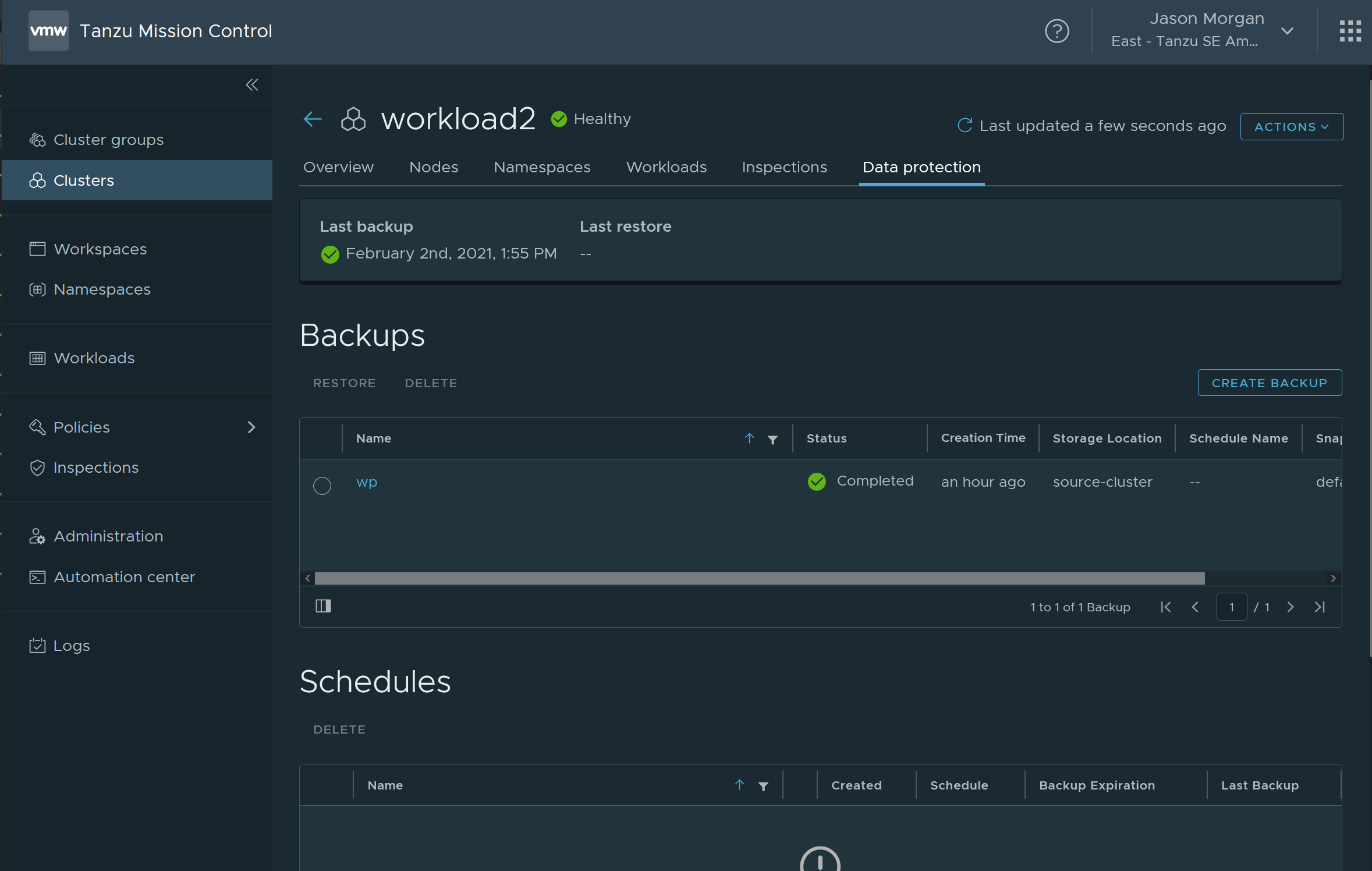 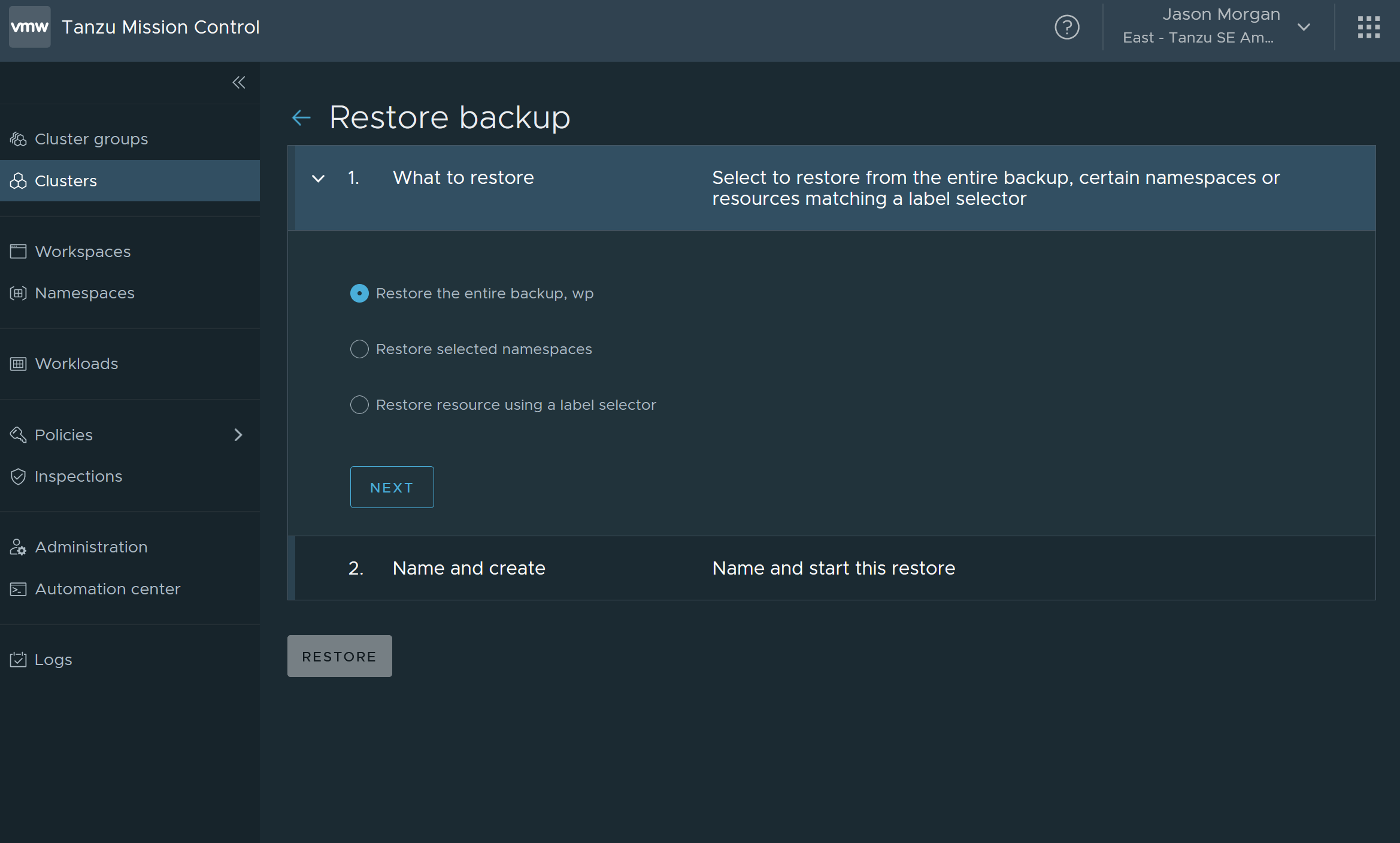 Now just wait for your restore to complete.

And that’s it! Go peak at your migrated wordpress blog.

Hop on to the terminal again and ensure you’re working with workload2. You can now run kubectl port-forward svc/new-blog-wordpress 8080:80 -n wordpress and dhe site will be available at localhost:8080.

With that we’ve walked through the full process of doing a cross cluster restore with Velero and Tanzu Mission Control. I wouldn’t say it’s the easiest process in the world but ti gives you a chance to dive into a bit of how velero works under the hood and if you think this is something TMC should support the folks over at VMware would love to hear from you. Regardless you now have the steps required to do it on your own.

Thanks so much for reading and I’d love to hear any feedback you have, please hit me up on twitter or Linkedin.